Anti-free speech in colleges is the ultimate bullying.  The worst bullies there are, is  the people who stop people from free speech.  When they don’t support the first amendment, when millions and millions of people have died to support it, they are believing in breaking the law, and believing in hate and violence.

It’s crazy to think that the Free Speech Movement began in 1964 by UC Berkeley students.  They were all about protesting a ban on on-campus political activities.  All fueled by the struggle for civil rights and opposition to the Vietnam War.  What has changed?  Now, fifty-five years later, unless you are promoting Liberal views, you are not allowed to speak.  You are not welcome.  The Liberal moral compass really needs to be looked at.  How can we allow ourselves to take such a huge step back in progress? 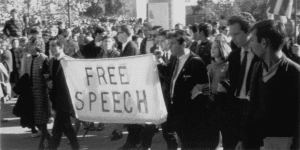 Anti-free speech quite simply is bullying, and bullying is hate. That’s it.  It is a hate that people have developed over the years.  And we need to fight it.  We need to continue to fight for free speech.

By stopping discussions, you’re nothing but a bully. And if we are against bullying, we should be against anti-free speech.  That is my opinion.  It’s just not right!

This is being fueled by taxpayer funded College professors, more reasons why we should abolish tenor. Tenor has been greatly abused, often as cover for doing the wrong thing. Questioning American ideals is ok, but encouraging anti-American, anti-free speech, is wrong. Lets do the right thing.

Thank you, President Trump, for signing the executive order protecting free speech on college campuses.  I surely hope this can  get the current college administrations and the American people thinking more about free speech and what we can do to support it.