If we can begin treating each other with greater dignity and respect, over time our country and the world can become a much better place. It’s a simple idea, but not simplistic at all.

We advocate for finding and developing peaceful approaches that oppose Hate and Violence in religious or political attitudes, and we are also exploring pragmatic approaches on the community level to stopping the violence that hate generates.

We’re committed and we’re working hard. Please help us help others by giving us your ideas and solutions along with your financial support to the extent you can. Thank you.

WHY NO HATE NO VIOLENCE?

Over time this simple idea can help the U.S. and the world become a much better place. What we need right now is an alternative ideology to combat terrorists, racists, bigots, religious zealots, politicians, and anyone else spreading hate and violence. If you hate anything; ask yourself why? Hate is a feeling and emotion that everyone has a power to change.

This theory is a safer ideology for all parties. And all individuals. It is an alternative approach to combat terrorists, racism, politics, and gender relations. Who can logically disagree with these thoughts? 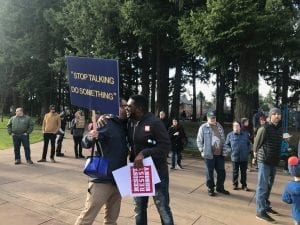 Who can argue with it? Who should listen to them? If they hate, that is their problem. Show them how to make a change in how to talk without hate.

If you ask anyone if they believe in hate or violence, most would say no. So why then do we have so much in the world? Those who preach violence through the guise of religion and or any other organization should not be able to partake in the tax deductions recognized and provided by the U.S. Government.  Many other benefits are given to those who promote violence.

If you believe in hate, you may know some others who agree with you, but the majority of your peers, friends, family, and society may not. If you do or promote violence in this world, someone, a group, a government, a country, or all the above will always be against you. Violence is the last resort to solve issues of any kind.

This ideology need to spread to people who can honestly and passionately get behind it and influence it, individuals(s) who can develop it into policies and spread the word and transform these words into action.  Someone strong (like our President) who could be honest about the human shortcomings we all have could do the most.

We may not be able to eliminate all hate or violence in this world, but we together with similar thoughts and purpose can significantly minimize it.  We can be the good guys again and create a platform from which we can work to eliminate the radical terrorists without just war, and mainly make ourselves feel better!

I am convinced that life is 10 percent what happens to us and 90 percent how we react to it. So change how you react to all things in this world, and you might just change the world itself. Hopefully, our leaders will actually lead us in this effort.