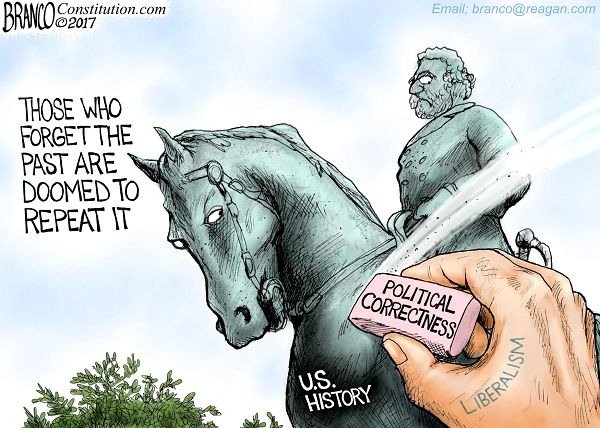 Let’s put up large well-lit plaques instead of tearing down our monuments.

One of the arguments for the removal of Confederate monuments is that they exist in public spaces without context.

They could be seen as a glorification of ideals that our country no longer represents instead of an example of how far we have come. So, instead of tearing them down, why don’t we provide that context? The cities and states that are home to these monuments should choose to maintain the monuments but put up a plaque that explains who the person was and what they did. In the case of Confederate generals, the plaque would explain the person’s involvement in the Civil War and that the war was fought for the preservation of slavery. The explanation should condemn the enslavement of black Americans, but let’s not forget that these pieces of art have become fixtures in communities and, beyond that, are the work of talented artists who spent time, sweat, and tears on them.

There will be people who are offended by this suggestion.

I recognize that. Those whose ancestors were enslaved and are reminded of that horrific history and pain by these monuments should be the ones in charge of the committees that would oversee what should be written on the plaques. Let those on the side of history that has been silenced for much of the existence of our country tell that story as they want it to be understood. Whether it be a few sentences or several paragraphs, providing context would allow for the preservation of the historical art while condemning racism and slavery.

Don’t we want the United States to be a country of redemption? Forgiveness?

If we don’t acknowledge the grim parts of our history, we may be doomed to repeat them. Adding a large well-lit sign explaining the historical context of these monuments would elevate them from a monument to a lesson. It could explain the wrongs of the person and how much our country has grown. If we intend to move forward and build a stronger, more united country free from the tensions of the past, we need to embrace our history and our monuments for the growth that they now represent.