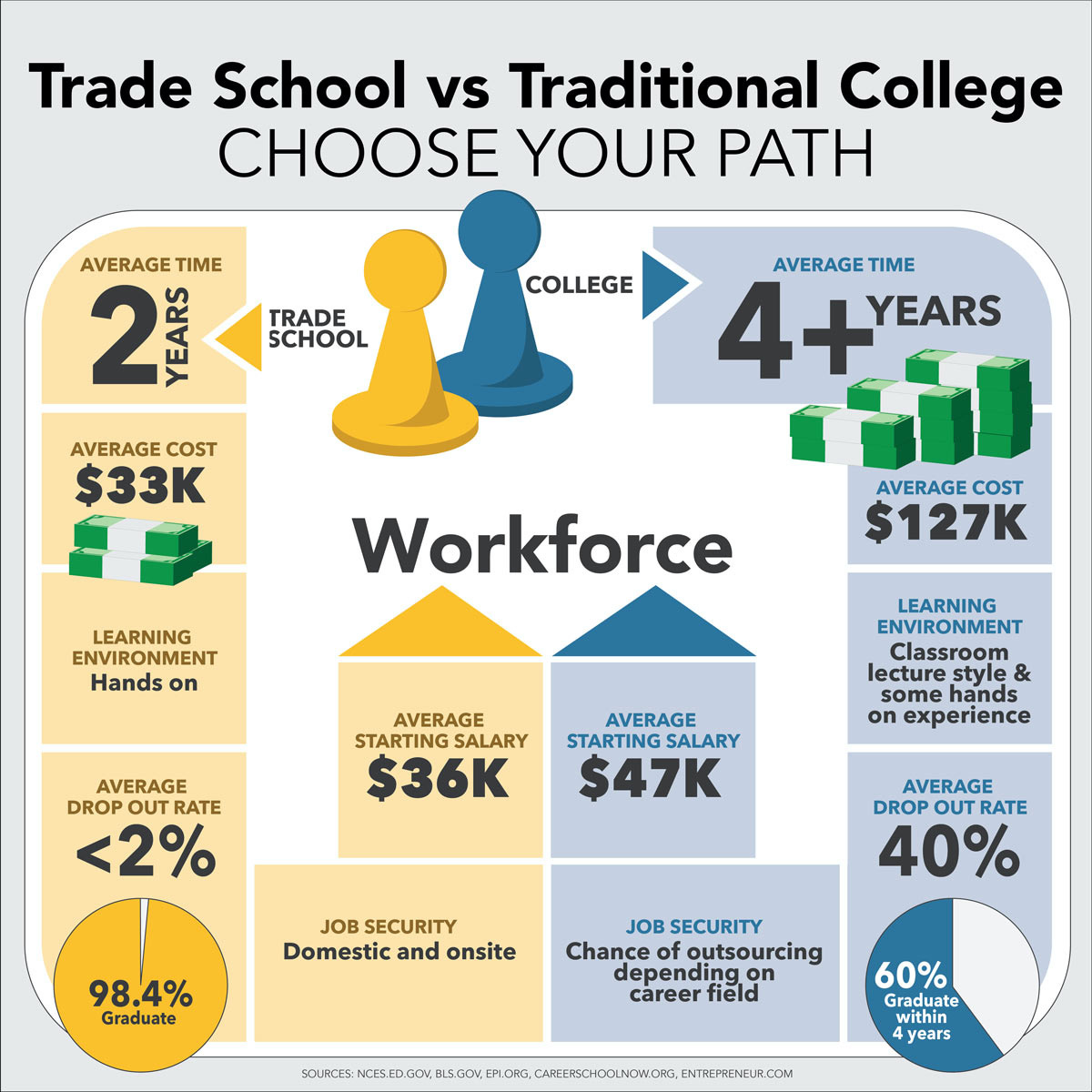 The Earn and Learn Theory Of Life After High School

We are doing research on the Earn and Learn Theory that addresses how a student can begin making early decisions on how he or she will approach their life and education after high school.  We urge parents to think about the options that may be available and attractive to their child for earning a good living while pursuing alternative educational goals and have discussions with them about their future.  It’s important to not wait until their senior year to begin looking at options other than straight-to-college, because if they have a game plan to earn and learn after high school, they can plot their last couple of years of high school in terms of preparing for a different and perhaps more satisfying approach to starting out in life.  For example, if it turns out they may want to learn a skilled trade or intern for a certain kind of business they’re interested in, all this can begin during their last few years of high school if they decide not to take the conventional formal higher education or full-time college route.

TELLING KIDS THAT THE MUST GO TO COLLEGE TO KEEP UP WITH THE FUTURE IS SIMPLY NOT TRUE.

We think that it would be of great benefit to students by the end of their sophomore year to participate in a program where they spend a week on Earn or Learn which is college education versus working after graduation.  We’re going to be writing more about it in our World Debating Forum where we plan to debate the issue quite a bit.  If you haven’t visited it yet, please go to WorldDebatingForum.com and take a look at what we’re doing to raise awareness of issues like this.

Here are some ideas we hope parents will share with their kids. When deciding on a career path, be sure you are not pursuing it because it seems like a fun and/or easy thing to do, or peer and teacher pressure.  For example, yes, becoming a social worker is rewarding in many ways, but it’s not high in monetary rewards. A High School student may be idealistic and reject the idea of needing to earn a living, so a loving parent might point out that they can go save the world anywhere on earth if they also have plumbing or nursing skills to earn a living with while they’re there saving the planet.

As a long-time employer I saw many employees that left our company when they got their degrees in social work or psychology or some of those areas, only to have them come back a year later and say, “I can’t work for that little money.  I make so much working here.”  In my case, “here” was the restaurant and hotel industry, and many, many of my employees made six-figure incomes starting from really good salaries and tips then later as manager/owners.  Yes, ideally you should love what you do in life, then it’s not work, but compensation for work is definitely something to be considered, including how to pay for full-time college if it turns out that’s what you really want.

IS COLLEGE NEEDED FOR EVERYONE?

WE DON’T THINK SO.

If a child chooses a career path requiring college, but college is a stretch, one option may be to go to work for a company right out of high school.  By getting good grades and showing responsibility, maybe even starting out as a new employee who does night school or online classes, they could wind up working for a company that pays for their college while they, get promoted, and are already earning a good living by the time they graduate with a degree.  What a great way to go to college for free, while advancing your career.

Another option to offset the cost of education is to join the military.  The military will pay for your schooling while you are learning valuable life lessons in responsibility and discipline, character traits that prepare you for life and pay to go to school after your service. It’s important for parents to research the available military options with a child who is interested – only a small % of the military is evert exposed to combat or danger. Many people overlook the Coast Guard, which has a lot of pretty interesting jobs and has full military benefits.

You can earn online degrees from some of the best Universities in the country by going to college online for much less money than attending classes in the traditional way, while you are earning and advancing your career. If you are taking online classes, you can work while you learn and still maintain a lifestyle that allows for travel and other things you enjoy in life.  You will have extra money to do those things if you work part-time and go to school online.  The best part of all this is you would incur less debt, positioning yourself with a head start in life, ahead of those who have run up huge student loans.

I have relatives whose kids go to math classes in college and they talk about politics half the time.  Really?  That’s what we’re paying for?  I don’t think kids should talk about politics very much until after they’re out of high school, because it’s so emotionally charged, and it’s difficult for them to have a neutral attitude, and not using facts, because facts rarely fit political agendas.  Talking or debating without facts is a bad habit to get into.  But I suppose they’re just imitating a lot of adults they see.

We think that too much emphasis and pressure is put on people about going to college.  I went to college, got several degrees, and I can honestly say none of them helped all that much.  As an employer, I would rather hire a well-rounded kid, a good “B” student (not necessarily straight A student) out of high school and teach them to work for me while they went to school.  Many large companies do just that, offering to pay for college while you work for them.

Imagine – Amazon hires a lot of people right out of high school, and some even spend their last two years of high school working five to ten hours a week working at Amazon in a warehouse, learning about the company, preparing them so that when they graduate from high school, they are literally ready to go to work and make a decent living while finishing their online or night school education at their company’s expense.

Let’s show our kids how to earn and learn.  They need to be educated on how much various careers pay, what’s required degree-wise and how much those degrees will cost in the long run.  Some of the trades pay more than lawyers make.  You don’t have to go to college for most trades, but those trades are sometimes hard to get into because of limitations imposed on the supply side through their unions.

For example, let’s say you went to work for Amazon right after high school, starting at $12 an hour.  Within five years you would easily be making $25 to $40 an hour if you work hard and get promotions.  On the other hand, if you go to college and graduate in any of the social sciences and look at the lifetime income there, it is going to be far less than your lifetime income-earning potential in the business sector.  We all know $30/hour is about $60k/year – right at the US average. Know many good plumbers or electricians or nurses who only make $30/hour? Know any college grads working for less than $30/hour – 10 years after graduation? You would have benefits, including retirement in either job, but another consideration in favor of working for a company like Amazon is the ability to have stock options.

So, we could make the case that if you compared the two years of college, and you didn’t’ care about just going and partying for four years (which is what the social science majors sometimes do), you’ll probably make more by not going to college in the long run.  One must also consider that careers in the social services have income limitations as government employees.  If you work at Amazon, you could leave them in ten years and probably pick up a great job somewhere else or stay with them.  Just do the math.

WE THINK EVERYONE SHOULD GO TO COLLEGE THAT WILL BENEFIT FROM IT, LIKE ANY PROFESSION THAT REQUIRES IT, OR YOU FEEL A REAL DESIRE, NOT SOCIATAL, POLITICAL, OR PEER PRESSURE.

In summary, I think college education is extremely important for anybody going into certain careers – some business categories, lawyers, doctors, and other specialized fields.  But let’s offer other options to folks who don’t want to go that route.  It’s time to dispel the notion that going into trades is somehow less important or respectable than gaining a college degree.  There are many paths to being successful in life.  We just need to highlight all possible paths for our kids and then let them choose which one to follow knowing we’ve done our best.